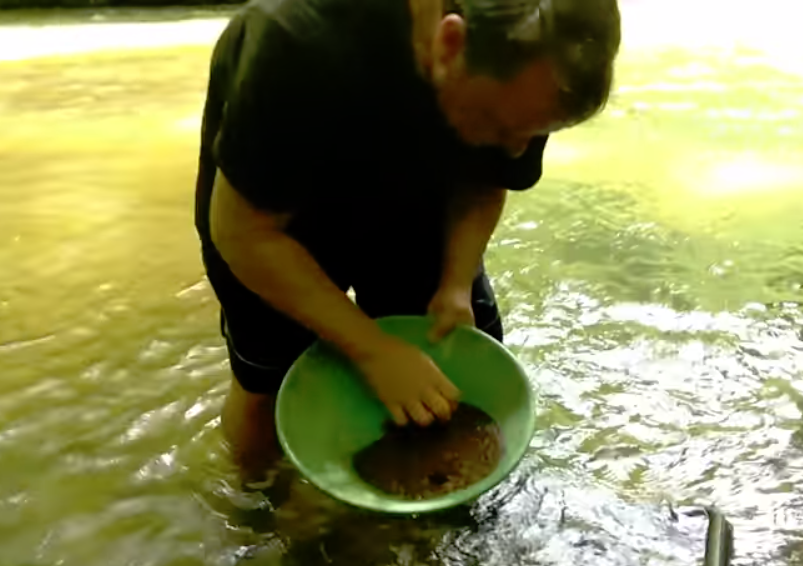 Here’s a short video on how to pan for gold: 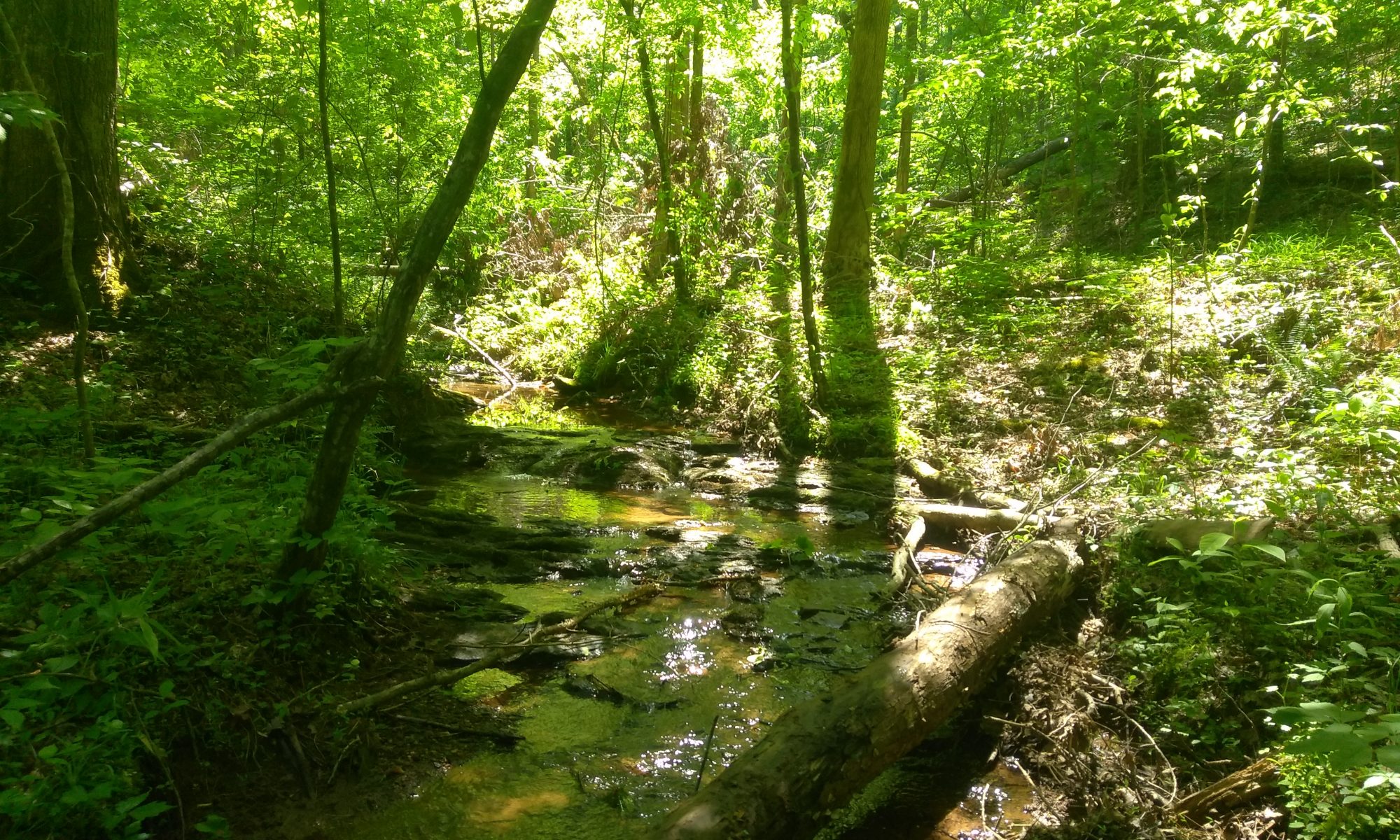 The first step in gold panning, highbanking, gold dredging or any gold mining adventure is to pick your spot. In this article, we’ll go over the best spots to find gold and how to examine the river, creek or gold property that you have available to find the most gold!

There is a property of gold that you’ll hear over and over that’s very important in gold mining. That property is the specific gravity of gold! Gold is heavy and this property helps us find the elusive metal! Gold enters a creek or river from a lode vein outcrop and travels with the flow. Where it stops, “nobody knows”, but we can make a educated guess! Let’s look at a diagram of a river and discuss possible locations that gold might be found:

As you can see from the above diagram, the best locations to find gold in a gold bearing river or creek are around the inside bends and behind large obstructions such as boulders or bedrock protrusions. This is due to the fact that the water slows down on the inside bends causing heavy gravels and gold to fall out of the water stream. The same is true for large boulders pretty much anywhere in the river, they create natural riffles with a large pressure drop directly behind them. The gold is 19 times heavier than water, so the large boulders or bedrock protrusions drop the gold travelling in the gravels during heavy rains and flooding.

Fool’s gold, AKA, “Pyrite” has “fooled” many prospectors and gold miners! It’s tricky because its a similar color as real gold and it glitters in the sun. You’ve probably heard the expression, “all those glitters are not gold”, they’re referring to pyrite and other minerals that catch the sun and sparkle in the gold pan. The first difference between pyrite and gold is the fact that pyrite isn’t even a metal, it’s a mineral.

GOLD — “a precious yellow metallic element, highly malleable and ductile, and not subject to oxidation or corrosion. Symbol: Au”

So pyrite is iron disulfide and a mineral or a naturally occurring, inorganic substance. In pyrite’s case it has a very crystalline structure. Gold is extremely malleable and would never have sharp edges if it’s spent any time tumbling in a river! Let’s look at both pyrite and gold side-by-side:

As you can clearly see, gold has a much deeper yellow color than pyrite. In addition, you can see sharp edges to the pyrite, in fact, it’s not difficult to see the crystalline structure. Gold on the other hand usually has rounded edges and softer lines, since its soft and easily manipulated by the forces from tumbling with the rocks, gravel and sand in the river or creek. If gold has been recently released from the lode rock, it can be “stringy”. The gold nugget on the left in the comparison above is an example of potted or “stringy” gold, but it still looks nothing like pyrite!

To the novice prospector or gold miner, pyrite looks quite similar to gold, but don’t be “fooled”. It won’t take you long in the field to be able to tell the difference. You don’t want to spend a day collecting worthless minerals instead of what you’re after, GOLD! One other distinct difference between pyrite and gold is the specific density difference. Gold is very heavy! Pyrite is not. The specific density of pyrite is 5 and the specific density of gold is over 19! That means that the same volume of gold weighs 3.8 times that of pyrite. All methods of gold mining use this fact to separate gold from lighter materials, including pyrite. So, if you can’t figure it out, put your pyrite in your gold wheel and if it makes it up to the catch bin, maybe you really found some gold!

My brother and I have been gold mining since the mid-1990s. Originally we would dredge all day and then cleanup and pan the dredge concentrates directly in the field. We found out that we were missing some of the gold by just panning in the field, so we started to save the dredging concentrates for further reclamation at the cleanup shack back home. We would still pan out in the field and remove any pickers and large flakes, but now instead of panning directly into the river, we save the concentrates. After running the secondary concentrates thru the gold wheel here is what we found: 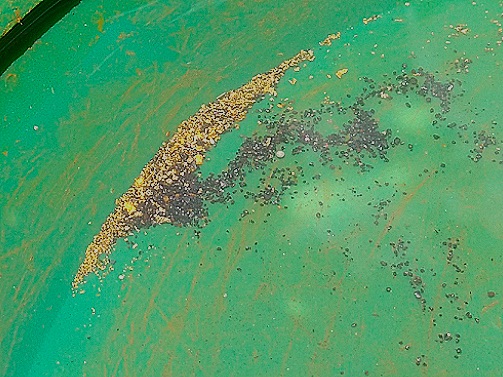 As you can see, it really pays off to take your gold dredging concentrates home for final gold removal! We missed a lot of gold in the field!

A few years back my brother and I found this little waterfall that we decided to dredge out using our 2″ dredge. We did pretty good and found stringy gold like it was near the source. Now, we decided to go back and see if over the years the flood waters have replenished the gold. So we set up the 2″ dredge. This time we added a 2nd sluice box. During a different outing we had two grains of gold that we sucked up to see if we were losing anything and yep, sure enough we were. We only recovered one of the two grains. In fact, the 2nd sluice box ended up being the only place where we found gold this time around. What a night mare; It only goes to say that testing configurations can really pay off. To see how much gold we found the 2nd time around, watch the video below.

Georgia’s mild climate means that looking for gold can pretty much be a year-round adventure.  But, it’s nice to be comfortable when pursuing recreational hobbies.   For Georgia’s climate that is roughly March – October.   If you are going full diving then maybe a bit shorter.

Here’s a short video on working on the nozzle of a gold dredge:

All the property in Georgia where you can gold mine is on private property, so the easiest way to get started finding gold is to join a gold mining club.   Mike and I are members of the Weekend Gold Miners and the GPAA.  The GPAA doesn’t have much in Georgia,  but they do have one site that we actually last tried in 1998!  So, obviously, I don’t have a lot of information about the GPAA site(s) in Georgia.  However, if you can believe the reviews on the GPAA website regarding GPAA claims, the GPAA Bachanan claim sounds pretty good.  I’ve also been a member of the Weekend Gold Miners club since 1997 and I highly recommend it.  Here is there contact info

I signed up at Crisson’s gold mine in Dahlonega:

Another club that’s has one gold property in Georgia is the LDMA.  They have a property near Gold ‘n Gem Grubbin in Cleveland:

The LDMA is a little pricey for me, but I think its worth checking out.  I’ll let you know my thoughts when I get more info.

If you don’t want to join a club, you can pay-per-dig at Gold ‘n Gem Grubbin in Cleveland:

If you can’t find a club or don’t want to pay at Gold ‘n Gem Grubbin, you can drop us a line, maybe we’ll work out a day to go out and find some gold!

North Georgia Relic Hunter club — I don’t have a lot of info about this club, but their website says they meet twice a month in Marietta

Here are some photos while dredging with our Keene 2″ gold dredge in September of 2015.  We haven’t made it out this year, but except more photos to come! 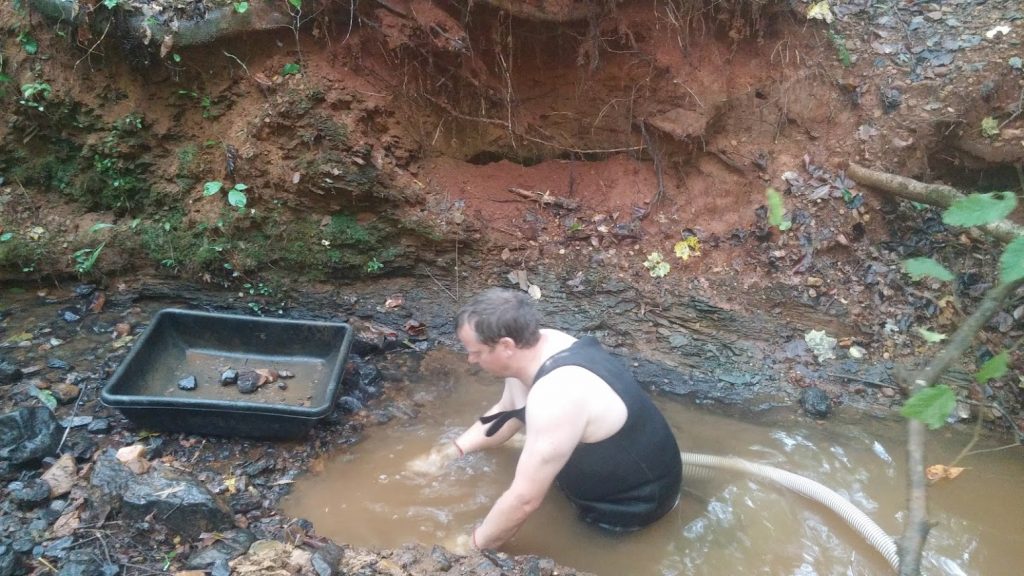 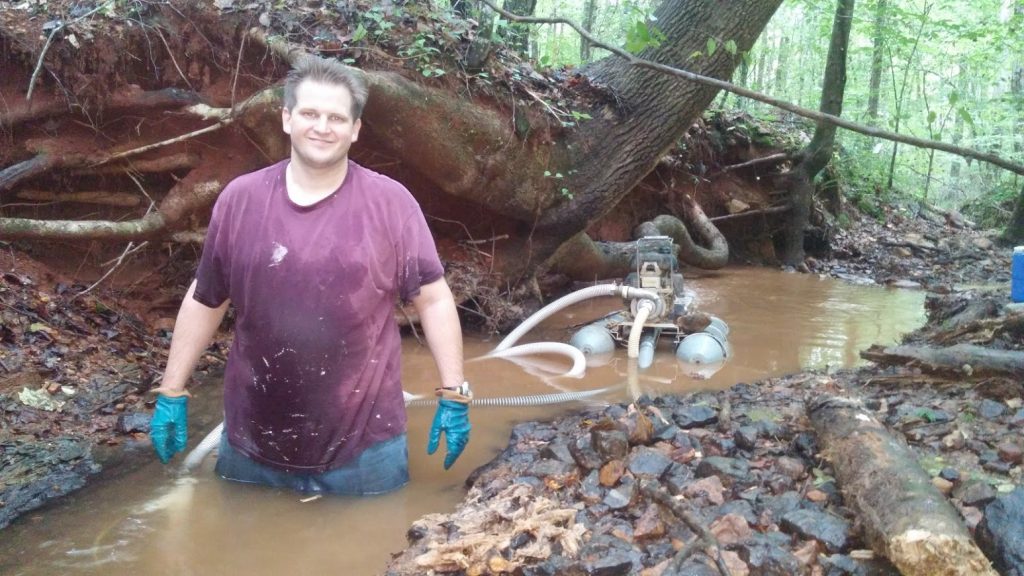 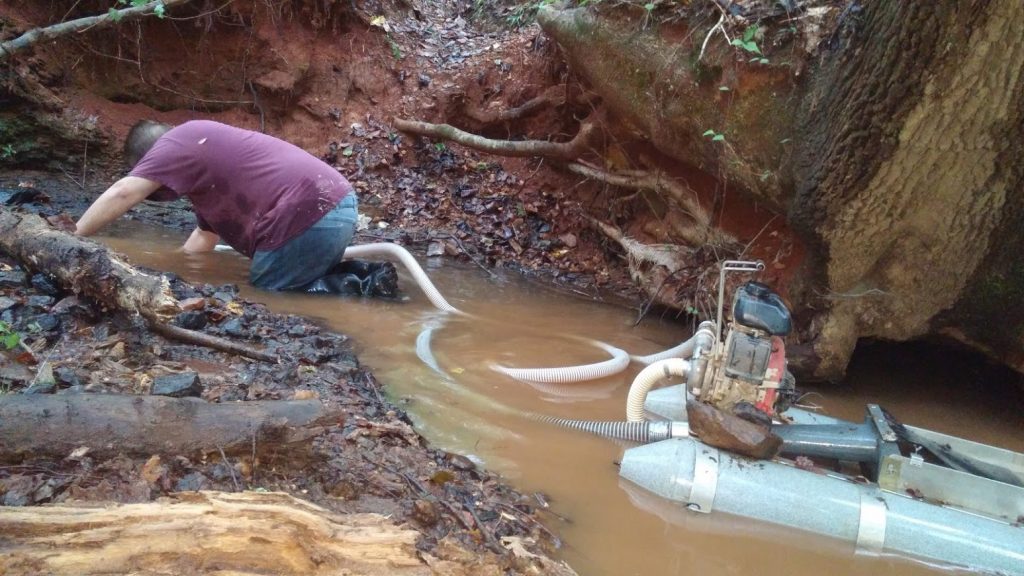 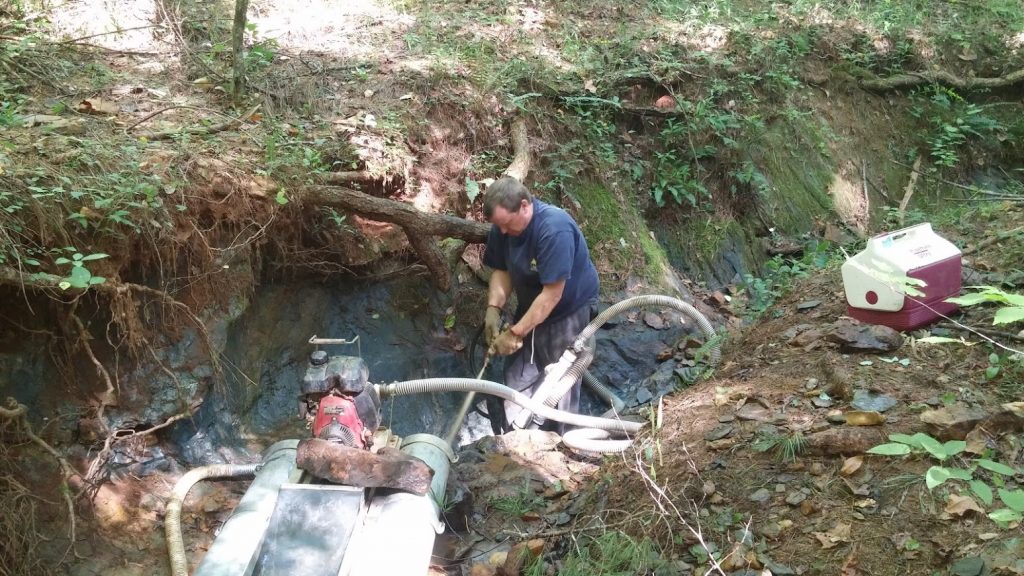 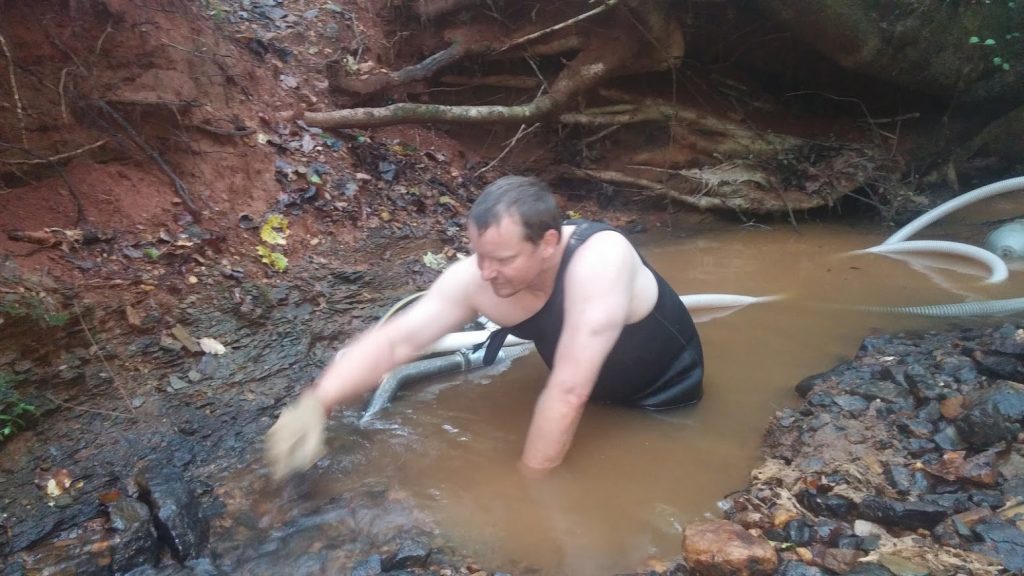 You can’t find gold sitting on the couch, get out there and find some Georgia Gold or wherever you live!

In 1909, over one hundred years ago, the very competent state geologist S.P. Jones created a map of the gold deposits in the state of Georgia.   Below is a copy of the famous gold map:

This map along with the KMZ file of gold mines is a great resource for gold prospecting in Georgia.  However, importing this map into google Earth isn’t as easy as importing the gold mines file, but it can be done.  OK, here are the steps: 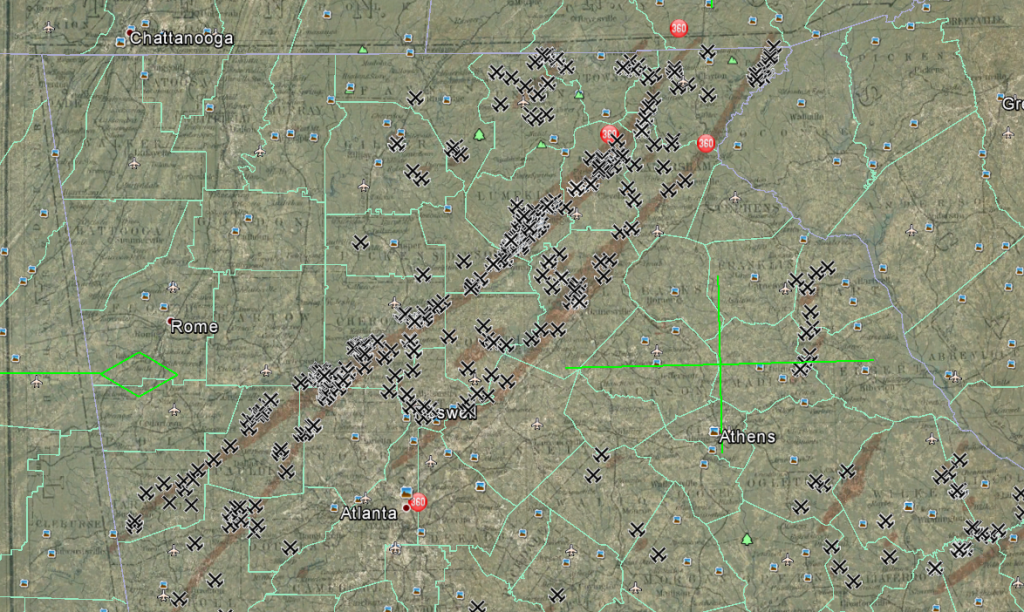 It’s not perfect, but you can move and scale the 1909 map for each county and as you can see the 1909 gold deposits map matches pretty close with the locations of the gold mines in Georgia!   I hope you find this information useful! Have fun prospecting and please leave us your comments.